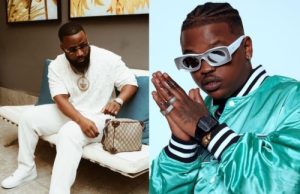 Things have taken a different turn for Focalistic and Cassper Nyovest after Cassper’s verse on a new single tagged “Ooh Aah” came up. In that verse, Cassper spoke about being a motivation to Focalistic and the producer didn’t find it funny at all.

“Hip Hop ain’t dead it only dies when I say so Put it in a coma Just so I can show y’all the game ain’t shit without Don Nyoviolas (Woo) I said I put it in a come Inspired everyone of you niggas including Foca, I’m too far Ao eketse biki nyana aketsi gore bang kutlwa (Kutlwa)” Mufasa’s verse.

Things turned left after the Amapiano star tagged the rap verse a diss and further spoke of how he’s not indebted to Cassper despite being an inspiration years ago. Cassper publicly responded that he was not attacking anyone on the verse.

“Wasn’t a diss. All I meant was that I was proud to have inspired an artist like him who is flourishing like he is. He said it himself that he was inspired by me so it was nothing new but now shit’s weird now. He should’ve responded with a song if he wanted to take it there,” He wrote.

Returning to social media, Focalistic shared photos of himself with Patrice in Paris and said he is his new inspiration.

“Met my inspiration in Paris @realpatricemotsepe Billionaire ka sebele! We from the same hood. Same lingo. Having dinner in France,” wrote the singer.

You were not bragging but being proud to have inspired a big star like foca who’s now flourishing over the World and its something that anyobody would be proud of but unfortunately he chose to overreact over something that he already knew and said before. pic.twitter.com/BHzZE1e2qt

A post shared by PRESIDENT YA STRAATA 👨🏾‍💼 (@focalistic)