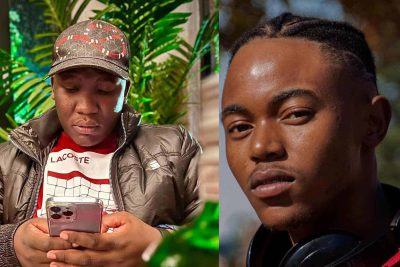 Busta 929 has released a statement in response to exploitation allegations made by an Amapiano vocalist named Mgiftoz Entertainer.

The singer lamented bitterly on Facebook on how the music producer exploited him by either underpaying him or not even paying him after featuring on most of the producer’s hit songs.

We hear about these kind of things everyday and sometimes, it’s little wonder why there’s so much politics and hate in the industry.

“I mean I work my ass out on most trending songs, not even getting the credit I deserve, the are people up until today who don’t know am the Vocalist behind, Sdudla no Slenda,Vandam ,Sgodo ,Yuriboyka, Nompumelelo and etc. am writing this in tears cause I mean I have a daughter that needs me full force as a father n here am famous but with a low bank balance” Mgiftoz Entertainer wrote on Facebook.

Mgiftoz said the DJ didn’t wish him a happy birthday and he’s been acting cold towards him since he declined joining his record label named: Thupa Industry. He also claimed to be living in an undeserving house.

“It’s so depressing as an Artist to see most of your songs topping charts but your bank balance is topping zeros awna niks sdudla no Slenda is on 1.7 million plus because of my voice I don’t know about other platforms but still no music video for me or any payment from the song” he finalized.

In response to the allegations, Busta 929 claims they are all false and that Mgiftoz Entertainer must retract his statement.

Read the full statement below: 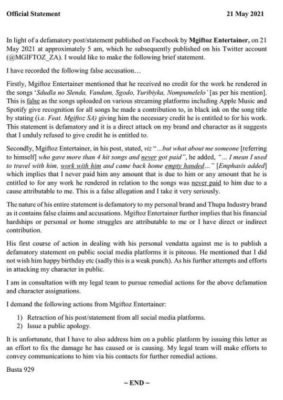