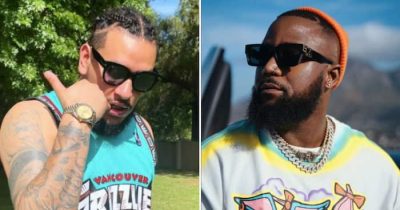 The two haven’t been in good terms for the longest time, and they even had a face off last week, now this development has put fans on the hot seat.

Fans have taken to social media after the unveiling to ask if it was a joke or stunt. Coming from Cassper who has sworn that he must settle the dispute between himself and AKA in the boxing ring.

People are saying the picture was photoshopped because AKA would never accept anything from Cassper, but who are we to say? The two have been on and off.

Also, Cassper Nyovest said something about being able to troll and play the game himself. Now that he has posted about AKA being his brand ambassador, he also used AKA’s post to push his fill up concert happening this December.

Get ready to tweet !!! December 3rd!!! We filling up Mmabatho Stadium!!!! 50 days to go!!! Get your tickets!!!! #FillUpMmabathoStadium pic.twitter.com/p5QEZGqzWU