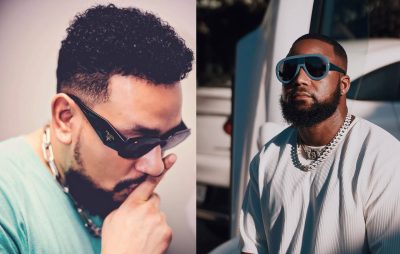 This on and off beef between AKA and Cassper Nyovest seems to be taking a different turn. Both rappers aren’t backing down and a lot of trash talk has been going on via social media and, a lot of it stemming from Cassper Nyovest.

While Cassper is possibly an online fighter who has been trying to get AKA in the ring for a while now for their boxing match and that’s not working out.

AKA has decided to make a different bold move. He took it a step further by dissing Cassper Nyovest to his face and made sure he humbled the rapper.

The video has since circulated all over social media, with a lot of people saying that Cassper Nyovest asked for it, and he got what he asked for.

AKA who is known by his real name as Kiernan Forbes performed his diss song tagged “Composure”, aimed at Cassper who was part of the audience.

Cassper Nyovest was part of the audience that was watching AKA perform Composure👀 pic.twitter.com/IUDW3CFTm9

Kiernan tells Cassper to stand up and take Composure with chest. And Cassper waste no time. And the crowd connects to the lyrics like medulla to heart. That was surely a Woooooh Haaaaaah moment! 🔥🔥🔥🔥🔥

Supa Mega lives in comics, better villain than Thanos in my books. 🔥

Cassper Nyovest in the audience while AKA is banging Composure.. pic.twitter.com/13f0Hn9vLU

Caspper on Twitter: I can’t wait to meet in the ring and beat you up

It was this moment when I knew Cassper is afraid of Kiernan. 💀😭😭 pic.twitter.com/W9L8tiLqwN

Cassper comes up to AKA with his squad and thought AKA would back down?? 😂😂😂😂😂

AKA and Cassper must get in the boxing ring and solve their issues.

Nah, forget about it! It’s still gonna act like they’re kids on Twitter & in public or everywhere. https://t.co/HIQHbpRW7F pic.twitter.com/Kx4N7RVCxY

At this point AKA won this beef a long time ago. If we’re talking the score then it’s probably 10-1 and Mega is winning. Cassper was definitely rattled this weekend shem. He had a horrible weekend even worse cause mega has a hit…

AKA took casspers only successful artist under him and dated her.
That for me was just a nail in the coffin.

Cassper didn’t even have the guts to point his finger at AKA. 😭😭

AKA disrespect cassper face to face…

I see people asking why AKA is not Fighting Cass. I will say one thing: Musical battles are fought in studio. The ring is for physical battles. But ke a lion will never choose to fight a crocodile in water. pic.twitter.com/o0757H7OMJ