Home » News » AKA Gets His Name Removed From Cruz Watermelon Bottle

AKA Gets His Name Removed From Cruz Watermelon Bottle

AKA Gets His Name Removed From Cruz Watermelon Bottle: South African music maester, AKA has explained why his name is absent from the new Cruz drink.

A few weeks ago, there was a bit of confusion on social media after a bottle of the aforementioned alcohol brand was without the rapper’s name. Fans wanted to know what was happening.

Taking to social media, the rapper explains why the initial event occurred. According to him, there had been an adjustment made following his request that Cruz should remove his name from the watermelon bottles because he planned to launch his own spirit brand in the future.

The brand has accepted the rapper’s request and he’s grateful for their understanding, as he remains an integral part of the Cruz family and a valued business partner.

“A good day in the office today- while the Cruz brands will forever remain both in my heart and my bar, I’ve taken the decision to evolve my business and will be launching my own spirit brand in the near future. As such my name will be removed from the Cruz Watermelon bottle, and Banana will exit in summer”.

“Much love to the @cruzvodka Family for their understanding and for supporting this new chapter of my life,” he added.

Read the full statement shared below: 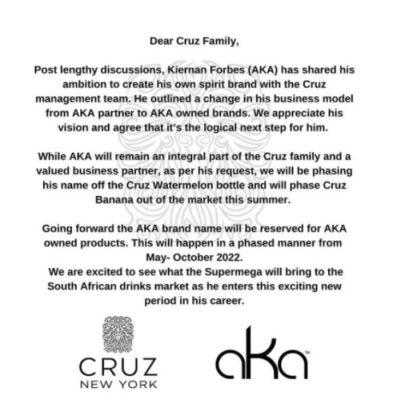