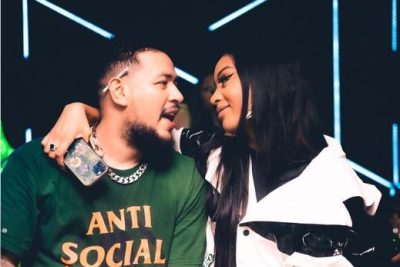 AKA Celebrates Girlfriend Nadia Nakai On Her 32nd Birthday

The rapper and his girlfriend had a very exotic and fun-filled weekend as she had a pre-birthday celebration at the club.

Taking to Instagram on Wednesday, AKA shared some dope photos of himself and Nadia Nakai at the club and it could be deduced that they were having the time of their lives.

He captioned it by wishing her a happy birthday and further revealed that she saved him. We can also put the pieces together, even if it wasn’t detailed on how Nadia saved him.

We know that he started dating her after losing his fiancée, Anele Nelli Tembe who allegedly committed suicide by jumping a high storey building.

However, we do know that he seems to be in a much better place now because of his new found love relationship with Nadia Nakai.