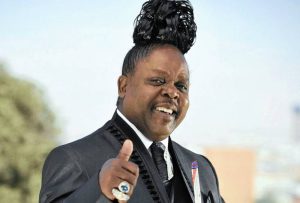 It would seem that a lot of rappers are being dragged into the Hip-hop diss train. From Big Zulu to AKA, Cassper Nyovest, Duncan, Kwesta, K.O, everyone in fact.

Duncan released his own diss single earlier, and he went hard on it. The talented rapper not only dissed Big Zulu but also name-dropped Papa Penny in his new Big Zulu diss track “Umngcwabo.”

Duncan returned with his own diss track which he tagged “Umngcwabo,” and name-dropped Papa Penny (calling Zulu Papa Penny). Twitter users are not having any of that. They have jumped on the gist, firing Duncan for even involving Penny.

A Twitter user went as far as digging up an old video of Papa Penny responding to someone who claims to be his child to express how the TV personality would feel about the diss song. In the video, Papa penny said:

“Nonsense, don’t do that to me. Maybe you lost your father, you think I’m your father. I’m not your father. My name is Penny Penny. I cannot have a son stupid like you, ugly like you”.

Well, the hip hop industry is definitely on fire, and we sure hope it doesn’t advance to a throw of hands physically.

Eish Listen: Duncan responds to Big Zulu. Ehhh he went hard on this one calling bigZulu Papa Penny oh And apparently Somizi needs to tell us something about Big Zulu.#Duncan pic.twitter.com/5275EWDYnU

In other countries you get arrested for what #Duncan did to Big Zulu.

Duncan has started another 1

U Papa Penny will not sleep today 😂😂😂😂 pic.twitter.com/dwuY1bD56A