Home » News » Master KG Dragged For Getting Back With His Ex, Makhadzi 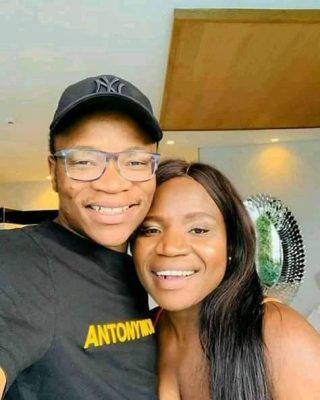 Master KG Dragged For Getting Back With His Ex, Makhadzi

Master KG Dragged For Getting Back With His Ex, Makhadzi: Just when we thought that it’s too early in the year for any violence, Master KG happens to be on the receiving end of what one may call a well deserved one.

The music producer who dated Makhadzi for some years officially broke it off with her in 2020. Sometime last year, people began to notice that the ex-lovers were becoming close again. The closeness was immediately dismissed as two musicians coming together to make music and nothing more.

But it seems it’s indeed more than that. South Africans got the shock of their lives when Master KG referred to the Limpopo Queen, Makhadzi, as his wife whilst performing on stage. The artists were also seen sharing a kiss on stage, which has people wondering what is actually going on.

It looks like they are indeed back together as Master KG has been all-around social media supporting Makhadzi’s act and hyping her talent but South Africans do not seem to be buying his latest show of affection. Many tweeps have taken to social media to express their disappointment saying that the record producer is just an opportunist who is only trying to get back with Makhadzi because she’s more successful than she used to be.

A tweep said; “I was shocked when kg was going to makhadzi gigs to ‘support her’. Makhadzi is more popular now. Gets more bookings. Has more followers on FB. That was an attempt by KG to revive his wanning career. shine your light with Akon flopped. Money giveaways on twitter didn’t help.”

Master KG replied to the tweep saying; “You dont know sh$t!my guy only if you knew how much money i get/got you wouldn’t be talking this shit..and that song that you say flopped thers no song in SA in 2021 that can match its streaming numbers…yall should stop this shit now.”

Many other fans went on to drag Master KG around Twitter streets but the artist doesn’t seem to care much.

Master KG refers to Makhadzi as his 'wife' during their live performance. pic.twitter.com/8qzyBdvCPX