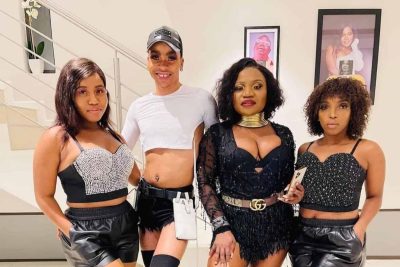 Makhadzi Explains Why She Pushed Her Dancer Off The Stage

Makhadzi Explains Why She Pushed Her Dancer Off The Stage: Talented South African singer and dancer, Makhadzi got tongue lashed after a video of her pushing one of her dancers off stage surfaced.

The singer who isn’t one for public violence of any of the sort was seen in this video where she pushed the woman off the stage while they were dancing.

Makhadzi had tried to caution one of her dancers who was spraying water on stage, and she instead hit the dancer who tumbled off the stage and landed on the floor.

The video has garnered mixed reviews; while some persons tried to understand the situation, other requested that she explain what happened and apologize.

Although, the video itself was clear that the whole action was a mistake but fans would like to make an issue out of nothing anyway.

Makhadzi decided to publicly addressed the viral video. The singer apologized to the dancer and said that they are cool and the dancer is fine.

She further said the situation happened because she was trying to draw the dancer back to her so she doesn’t pour water on stage as they still had more time to perform, and it will not be favourable to them if the stage gets wet. In a bid to stop her from pouring water, the dancer fell.

She also apologized to people who feel offended by the video thinking she’s a bad person. Makhadzi further spoke about her forthcoming EP, she said it will be out a week before she performs in Botswana for her One Woman show.

Sartuday at Moonlight Tarven in the North West where Makhadzi was performing. Ended up pushing 1 of her dancers off stage pic.twitter.com/bRoWR5onZx

This is what Makhadzi did to her dancer…… pic.twitter.com/L1wL17m4Io

I can’t stop watching that Makhadzi vid every time it pops up, shem she didn’t mean to😂

AKA: I throw phones over balcony.

Makhadzi: Hold my beer. I throw dancers over the stage

Makhadzi looking at her strength like….I never knew I have so much supernatural power in me..🥺 pic.twitter.com/qgRdXzhtXA

That video ya Makhadzi is really disturbing

I think Makhadzi pushed her dancer by mistake. It can’t be deliberate. I refuse. pic.twitter.com/p3I8LBHy5J