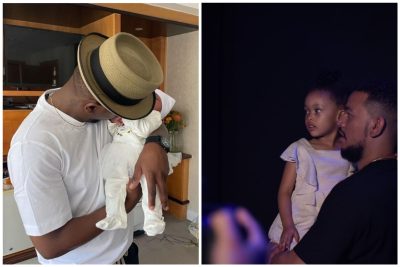 DJ Zinhle Dragged For Celebrating AKA On Father’s Day

DJ Zinhle Dragged For Celebrating AKA On Father’s Day: South African music producer and businesswoman, DJ Zinhle got trolled yesterday after she made a post wishing her baby daddy AKA a Happy Father’s Day.

The talented DJ who is into all sorts of business has a child with the South African rapper AKA, whom she dated some years ago. She revealed last year that she is in a serious relationship with Amapiano music artist Murdah Bongz, who is the father of her second child.

Yesterday being Father’s day, Zinhle made a post on both Instagram and Twitter to celebrate her baby daddies. This was received with negative reactions as tweeps called her out for disrespecting her current boyfriend.

In response to the trolls, DJ Zinhle made a post saying; “May you remember your own advice when you face the same difficulties/situation that you judge others on…”.

You see this thing of dating baby mamas is an extreme sport, imagine how the black motion guy might be feeling now.

Imagine your girlfriend posting some dude are “happy father’s day” aowa akere This nigga is her father, let Kairo post her father not you. Maturity ya masepa