DBN Gogo Urges Mzansi To Push Amapiano: It would seem that Nigerian singers are slowly taking over the Amapiano music genre.

The Amapiano music genre originated from South Africa and ever since its emergence, it has seen Africa unite over the genre. A lot of artistes, especially from Nigeria are beginning to jump on the music genre and also infuse it into their musical style.

DBN Gogo lent her voice to the cause by saying that South Africans should be vigilant about the genre or else it would be taken from them right before their eyes.

She made mention of Nigerian singer, Asake’s new album tagged “Mr Money With The Vibe” which is currently topping charts and said that despite the album being a good one, South Africans should push the genre and not allow it to be taken from them.

“We are in big trouble if we don’t start moving collectively and forcing our way into the right doors. Lol, it’s gonna be taken right in front of us. And don’t get me wrong, his album is so good. iyho. That’s the problem,” she wrote.

Bandile of Major League supported DBN’s speech, though he also appreciated the album.

“I have been saying this for long but echoes gonna be the death of us,” he says in the post on his Instagram Story.

“Biggest Amapiano is Asake,” he added. 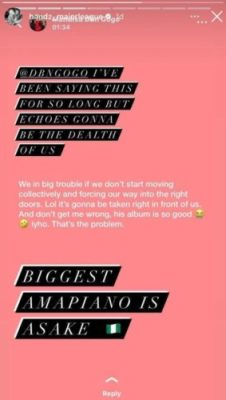