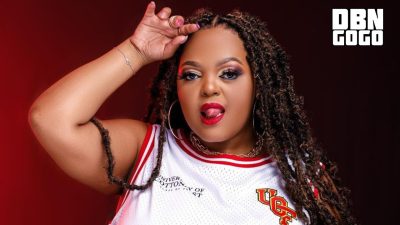 It would seem that the Twitter community came for her this time and witha certain vengeance, enough to dig up her past and use it as a leverage for their dragging.

DBN Gogo has been the talk of the internet for almost 24 hours after photos from the Real Housewives of Lagos premiere surfaced on social media. Her photo got people thinking she’s expecting a baby with Focalistic, which she dismissed, with:

She went ahead to bash those trolling her, saying they shouldn’t.

“I wish you guys could keep ur negative opinions to yourself especially when people are content and happy with how they’ve presented. You’ll never control how anyone looks. You can however control your mouths.”

I feel great. I look even better. I’m getting paid to be here. So njani? https://t.co/mQIl1FZ0jY

Unknown to her, it was just the beginning. A Twitter investigator took it upon himself to dig out the DJ’s old tweets which revealed her to be a cyberbully before she became famous, as she trolled the likes of Bonang Matheba because of their outfits to an event.

DBN GOGO was even hating in 2010? During one of the happiest years in SA History 😭 nah she better fold rn ! 😭😭

DBN Gogo was on fire before fame😭🔥 pic.twitter.com/djmya57tCI

DBN Gogo: “You guys must stop bullying us.. control your mouths” 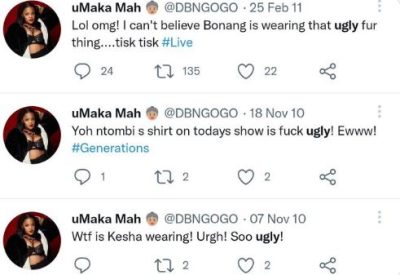