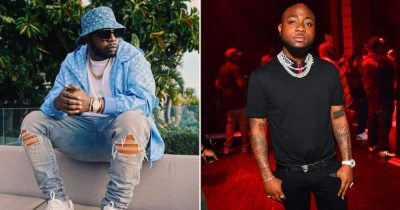 Davido Says DJ Maphorisa Doesn’t Like Him: After the ruckus on social media, Davido has finalized by saying that DJ Maphorisa hates him.

A lot of people are arguing about the fact that top celebrities like Davido, Wizkid and Burna Boy pushed the Amapiano genre to West Africa, but they can’t quite decide who did it exactly.

Wizkid dropped a new Amapiano song earlier, and it has been the source of the banter as it garnered lots of attention.

DJ Maphorisa came out to say that Wizkid jumped on the genre before Davido and this statement definitely caught OBO’s attention. Davido responded to the statement saying that DJ Maphorisa has never liked him.

“Kabza & Maphorisa was the first to put Wizkid n Burnaboy on an amapiano song Sponono that was a historical moment 3 years ago, research before tweet also it was the first time Wiz n Burna jumped on the same song together let it sink in,” he said.

Davido responded to Maphorisa’s tweet and said the producer never liked him despite treating him well.

DJ Maphorisa further responded saying he respects him for all that he did for the culture and isn’t fighting with him.

I’m not fighting with you at all, my brother. I’m just adding to the amapiano story, because it’s a BIG story with many players. Also this is a historical moment for SA. We’ve never had a genre blow like this. ALL LOVE ONE AFRICA 🙏🏾❤️ Respect u big time u did a lot 4 the Culture