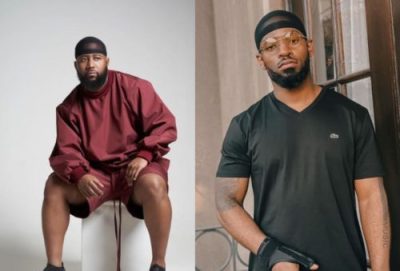 These two have been at logger heads since the trinity, if we’re trying to be sarcastic. They always have something to say or comment about each other and it’s not in the good lights.

From last year, their boxing match shook Mzansi and a lot of people really wanted to see that fight happen. Maybe it would cure them of their long lasting feud but alas, it didn’t happen.

Now, Prince Kaybee is up again under Cassper’s sleeve. A picture of Cassper surfaced online, where he was wearing a biker’s tight and jogging in the street. Fans couldn’t help but note the size of his privates.

Some commented about the size, comparing it to his physique, saying they didn’t match, while others simply laughed about. They were probably expecting something much larger. Who knows?

Anyway, Prince Kaybee decided to chip his opinion in. He noted that “For someone that keeps on talking about marete this is shocking.”

Cassper’s attention was in turn drawn to it and he had to respond. He did so by calling Prince Kaybee a little bitch who is afraid of stepping into the ring with him because he knows he would get a beat down.

“Prince Kaybee is a Bitch!! He will never ever step in the ring. Kabelo ke sefebe, that’s why a tsamaya a bua ka di tool tsa mauti. Lol… He is a sweet lil bitch and he doesn’t have the balls to step in the ring with a real man like me. The day he grows a pair, ill be ready!!!”

In the ring is where we real warriors meet. I’m so ready!!!