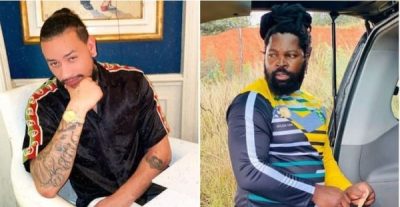 Big Zulu & AKA Go Back And Forth: It would seem that the “150” bars diss is yet to die down and there’s no way there would be peace if it doesn’t.

Recall when Big Zulu released the diss rap track “150 Bars” and it was aimed at a lot of rappers in the SA music industry and according to Big Zulu, it was meant to be a wake-up call.

A lot of rappers replied that diss track because they didn’t see it that way, instead, they saw it as a diss, and they gave their two cents.

AKA was asked to reply the diss by his fans, but he refused with a tweet saying that Big Zulu shouldn’t call it a diss track when he celebrated everyone at the end.

It took a while for Big Zulu to actually respond to AKA, and he did in a video that is widely trending now. He said he would lay hands on AKA and if he actually had something to say, he should go ahead and say it.

AKA further replied that he wanted some peace. Well, there is definitely no running for AKA, because he seems to have it all coming for him. Big Zulu, Cassper Nyovest, who else?

Big Zulu speaks on AKA saying his freestyle 150 Bars is Ubuntu Diss track and says he finna slap him whenever pic.twitter.com/BiWOGifPAV