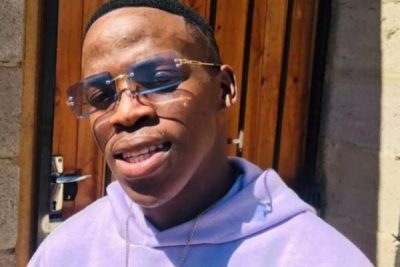 This is coming as a surprise to everyone because no one has exactly complained about the name or something, apart from the normal internet rants and jabs.

But obviously, Big Xhosa says he is not retaining the name. According to him, it isn’t giving him the respect and imagery he deserves because people associate the name with jokes and unseriousness.

He is of the opinion that brands and companies that wants to work with him aren’t doing so because of the name and the misdeeds of the past.

“The reason I’m dropping the funny character is because once people hear the name, they lose interest. It’s associated with the negative stuff I used to sing about, like not taking the vaccine. I was joking, but brands are taking it seriously and turning me down. It is messing up my business”.

“SOS is more like a serious guy, while Big Xhosa jokes a lot. Big Xhosa came about as a way to introduce me. I was making music as SOS at first and pushing music as him, but it wasn’t working out. So because I have a funny side to me, I decided to go with it because South Africans love to laugh. Unlike SOS, Big Xhosa went viral and made me a well-known brand. Now I want to bring SOS back” he said.

Well, what to say about the re-invention of Big Xhosa or should we say his alter ego. We can’t wait to see what SOS brings to the table. Fire or flame?