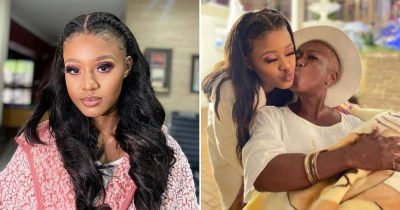 Babes Wodumo At War With Her Mother-In-Law Zama Gumede

Zama has never hidden the fact that she is not in support of her son Mampintsha, getting involved with Babes. In fact, she raised a storm at the time of the wedding and accused Babes of pinning a fake pregnancy on her son.

Few months ago, Mampintsha revealed that his mother had reconciled with his wife and went on to post a lovey-dovey picture of them on his Instagram page. But its not surprising that this reconciliation is short-lived as barely 3 months after the post was made, trouble comes to town again.

According to Daily Sun, the singer made a post on her WhatsApp status stating why she hates her mother-in-law. She said; “Ingakho umamezala ngingamthandi, ilamasimba awenzayo, nxa lo mama une drama,” which means (this is why I hate my mother-in-law. She’s doing shit and is full of drama).”

Zama in turn also replied that she hates Babes and doesn’t support her being Mandla’s wife. “I saw her WhatsApp status and I don’t like her either. In fact, I hate her. Mampintsha should not have married her.” “Babes … is not wife material”; she said.

She went on to add; “I don’t want to ever see her again, mainly because she abuses my son … and we have to protect Mampintsha from her. “I’ve had it with this girl and Mampintsha must never bring her to my house again.”

Zama revealed she has nothing to do with Babes and does not even want her to attend her funeral. She went on to say that she believes that Babes’ apology to her months ago was fake and it was a means to lure her into Mampintsha’s reality show.